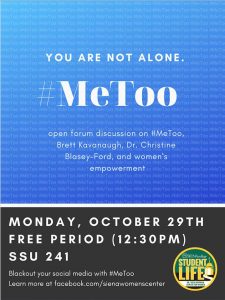 On Monday Oct. 29, Siena’s Women’s Center held an open forum discussion on the #MeToo movement. Other topics during the forum included Brett Kavanaugh, Dr. Christine Blasey-Ford, and women’s empowerment. These topics have repeatedly been in the news over the past few years, especially during the recent Supreme Court hearings and nominations.

The #MeToo movement quickly gained grounds on social media platforms in late 2017, providing a space for those who have been sexually assaulted or harassed to share their personal stories. Many confessions discussed workplace harassment. Even though the #MeToo movement gained prominence more recently, issues of sexual assault and harassment have always existed. There was much discussion of the #MeToo movement in the Supreme Court nomination of Brett Kavanaugh, who was accused of sexual misconduct and assault by three women. One of the women, Dr. Christine Blasey-Ford, testified before the Senate Judiciary Committee. Despite the women’s allegations, testimony, hearings, and a brief FBI investigation, Kavanaugh was appointed to the Supreme Court on Oct. 6, 2018.

People have been “blacking out” their social media to show their support of the #MeToo movement and that they believe survivors. In the wake of Dr. Ford’s testimony, social media sites were flooded with black profile pictures to stand in solidarity with survivors of sexual assault.

The Women’s Center held the forum for students and faculty to discuss their own thoughts and feelings regarding the larger #MeToo movement, as well as Kavanaugh’s recent swearing-in as a Supreme Court Justice. These types of conversations and open forums are especially significant on college campuses, where sexual violence can be prevalent. There are harrowing statistics about sexual violence and college students. For example, 1 in 5 women will be sexually assaulted during their college career. Similarly, 95% of these assaults go unreported.

During the open forum, the facilitators emphasized that the only thing allowed to leave the room was what people learned during the discussion; all private confessions and stories were not allowed to leave the room. This created a safe space for students to share their thoughts and feelings on the #MeToo movement and its relevance. Because sexual violence is a prominent issue on college campuses, it is important to have conversations and safe spaces where students feel able to share their experience.

As an English major, I am constantly asked what my plans are after graduation. The general response I get? “Good luck finding a job!” “What do you expect to do with that?” “Why didn’t you pick a real major?” In my experience, people frequently dismiss a liberal arts degree as unnecessary, even useless. If I had a dollar for every time someone dismissed my field of study, I could make a good dent in paying off my student loans. However, these negative attitudes towards liberal arts degrees are proven largely invalid.

An article in CBS News by Aimee Picchi emphasizes the growing importance of a liberal arts degree in the eyes of employers. College students are widely unemployed, but in an underemployment rate of various majors, English majors are nowhere near the bottom at 29%, and compared with business majors at 31%. 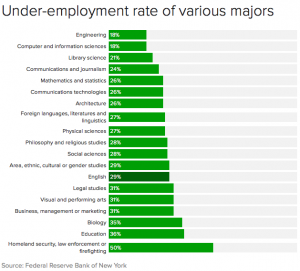 Picchi’s article suggests English majors and liberal arts students might have a better chance finding a job post-graduation than business or biology majors. Though popular majors are expected to perform well in the labor force, this isn’t always the outcome. Majors like business, legal studies, and social services professions are dubbed “problematic majors” by the article because they are expected to land graduates jobs. They similarly “comprise 4 in 10 bachelor’s degrees handed out by U.S. colleges” (Picchi).

Picchi explains that the main issue with these “problematic majors” is that they are preparing students for specific fields, rather than providing them with the skills to make them a “job ready adult.” Students will graduate without the necessary hard and soft skills needed for employment, making them not fully ready to enter the workforce. Picchi explains, “That’s not to say that business majors can’t find good job opportunities after graduation. But the key is focusing on developing skills that will help them stand out when they go on the job market.”

Liberal arts degrees, though unfairly considered invaluable, teach a broad range of useful skills that are adaptable to many career fields. The applications of communication skills, reading comprehension, and analytical abilities are endless. It can be frustrating to have your degree dismissed, but studies like this prove the value of a liberal arts degree. So when someone critiques your choice of major, remember that every major has value!