On Monday Oct. 29, Siena’s Women’s Center held an open forum discussion on the #MeToo movement. Other topics during the forum included Brett Kavanaugh, Dr. Christine Blasey-Ford, and women’s empowerment. These topics have repeatedly been in the news over the past few years, especially during the recent Supreme Court hearings and nominations.

The #MeToo movement quickly gained grounds on social media platforms in late 2017, providing a space for those who have been sexually assaulted or harassed to share their personal stories. Many confessions discussed workplace harassment. Even though the #MeToo movement gained prominence more recently, issues of sexual assault and harassment have always existed. There was much discussion of the #MeToo movement in the Supreme Court nomination of Brett Kavanaugh, who was accused of sexual misconduct and assault by three women. One of the women, Dr. Christine Blasey-Ford, testified before the Senate Judiciary Committee. Despite the women’s allegations, testimony, hearings, and a brief FBI investigation, Kavanaugh was appointed to the Supreme Court on Oct. 6, 2018.

People have been “blacking out” their social media to show their support of the #MeToo movement and that they believe survivors. In the wake of Dr. Ford’s testimony, social media sites were flooded with black profile pictures to stand in solidarity with survivors of sexual assault.

The Women’s Center held the forum for students and faculty to discuss their own thoughts and feelings regarding the larger #MeToo movement, as well as Kavanaugh’s recent swearing-in as a Supreme Court Justice. These types of conversations and open forums are especially significant on college campuses, where sexual violence can be prevalent. There are harrowing statistics about sexual violence and college students. For example, 1 in 5 women will be sexually assaulted during their college career. Similarly, 95% of these assaults go unreported. 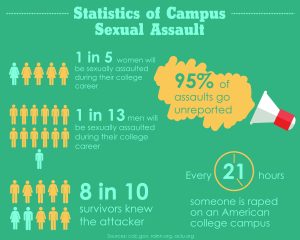 During the open forum, the facilitators emphasized that the only thing allowed to leave the room was what people learned during the discussion; all private confessions and stories were not allowed to leave the room. This created a safe space for students to share their thoughts and feelings on the #MeToo movement and its relevance. Because sexual violence is a prominent issue on college campuses, it is important to have conversations and safe spaces where students feel able to share their experience.