This past Friday, I attended the School of Liberal Arts Faculty Research Symposium. Held in the Maloney Great Room, the first session of the symposium showcased the Modern Languages & Classics, Political Science, History, and English departments. The event featured professors who have recently returned from sabbatical, giving them a platform to share their work with faculty, students, and the Siena community. Each presenter spoke for 15-20 minutes with a PowerPoint, then took questions from the audience.

Dr. Lisette Balabarca-Fataccioli of the Modern Languages & Classics department started off the symposium with her presentation, “The Female Other: Muslim Women in Early Modern Spain.” Her research extensively analyzes 16th century Spanish texts in which, in order to convert to a new religion, daughter characters break the bond with their fathers. Dr. Balabarca-Fataccioli provided historical context for her research project, explaining that in the 16th and 16th centuries, Muslims in Spain were forced to convert to Christianity. She also mentioned she will have an opportunity to present more of her research later this year at a symposium in Toronto

Dr. Laurie Naranch of the Political Science department shared her research on “The Power of Relational Narratives in Philosophy, Politics, and Practice.” She discussed some of the work she completed during her sabbatical, including working on book chapters, being published in a symposium, and revising an article, “The Narratable Self: Adriana Cavarero with Sojourner Truth.” As someone who hasn’t taken a political science class before at Siena, it was interesting to hear about her research.

The next presenter, Dr. Wendy Pojmann of the History department, titled her presentation “Espresso: The Art & Soul of Italy.” Dr. Pojmann is currently in the process of publishing a book that she wrote while on sabbatical and read an excerpt from her work during the presentation. According to Dr. Pojmann, her book attempts to explain the historical groundings of espresso, specifically in relation to its unifying qualities, globalization, and monetization. If you’re interested in learning more about Dr. Pojmann’s project and travels, check out her Instagram page at @wendysespressolife.

English professor Dr. Keith Wilhite delivered the final presentation of the symposium, “Recession-Era Suburbs: Race, History, and the Housing Crisis.” During his sabbatical, he developed two chapters from his new book, the manuscript of which is titled Contested Terrain: The Suburbs, U.S. Literature, and the Ends of Regionalism. Dr. Wilhite discussed the paradox of postwar suburban development, emphasizing the increased focus on privatism in suburbia. He also gave a brief overview of some of the texts he will be working with in his book, including Lorraine Hansberry’s A Raisin in the Sun and Clybourne Park by Bruce Norris. 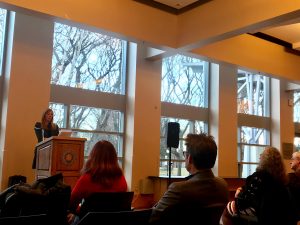 The event was a great opportunity to learn about the research professors conduct while away on sabbatical. As students, we rarely see all the work they do outside of the classroom. I have had both Dr. Pojmann and Dr. Wilhite as professors while at Siena, and it was interesting to hear about their research projects, as well as learn about Dr. Balabarca’s and Dr. Naranch’s areas of focus. There will be a second symposium session held on March 15, featuring the Sociology, English, Education, and Religious Studies departments. The second session will be held in room L26 of the Standish Library from 3:30-5:30pm.

Keep an eye out for extensive coverage of the first SoLA symposium by staff writer Madison Lemke in the 2/15 issue of The Promethean!

This past Wednesday Jan. 30, 2019, author and activist Tim Wise delivered a lecture at Siena as the speaker of the 32nd Martin Luther King Jr. and Coretta Scott King Lecture Series on Race and Nonviolent Social Change. This year’s lecture was held in the MAC to accommodate the large audience. I’m terrible with numbers, but there were easily over 200 students, faculty, and people from the local community at the event.

Wise had a very commanding presence as a speaker, constantly keeping the attention on him and using his humor to connect with the audience. He commented at the beginning of his presentation that he has been delivering speeches nationwide for almost thirty years, and his impressive rhetorical abilities shone through.

The MLK keynote centered on the idea of a dangerous historical memory. Wise tied this notion to the 2016 election, immigration conflicts, and police brutality, honing in on the idea that past history is constantly repeating itself due to America’s faulty historical memory. “We keep trying to reinvent the wheel instead of understanding that we’re fighting the same dragons,” Wise explained, “the same monsters we’ve always been fighting.” He concluded his lecture optimistically and answered an hour of audience questions.

I will be covering Wise’s visit in the 2/15 issue of The Promethean, so if you’re interested in more extensive coverage of his time on campus and lecture, be sure to check it out.