Each month, the Career Education and Professional Development office showcases an alumni of the month. In January, Alana Strassfield was chosen. Alana graduated from Siena in 2014 with a B.A. in Economics. I asked this former Liberal Arts student 3 questions about her time at Siena!

1) What made you decide to pursue the Bachelor of Arts in Economics? Why the Bachelor of Arts over the Bachelor of Science?
I decided to do the B.A. so that I could take a wider range of electives and theory based Econ classes, as opposed to the core business classes which I felt I could learn at a later time.
2) What was your favorite non-major Liberal Arts class you took at Siena?
One of my favorite non-major classes was Literature of the Enlightenment with Dr. Thomas Akstens.
3) How did your liberal arts education prepare you for the job you have now?
My liberal arts education was inextricably tied to my work with the Women’s Center and the Damietta Cross Cultural Center. Managing projects for both campus organizations and learning how to communicate across cultures through active listening have been some of the most valuable assets that I’ve brought to the organizations I’ve worked at. 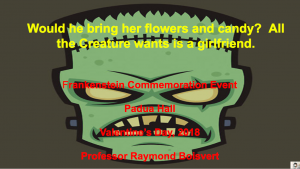 What did you do for Valentine’s Day this year? Were you out with your S.O. or did you sit around in your dorm wondering why you were single as a Pringle?

No matter what you did, you missed out on Professor Ray Boisvert’s special Frankenstein themed presentation, “Would He Bring Her Flowers and Candy? All The Creature Wants is a Girlfriend.”

Boisvert argued that the Creature in Frankenstein wasn’t a destructive being, all he wanted was love and affection. This idea is something that all living beings need. His two main arguments were, 1) Everybody needs to be loved, and 2) The lack of touch affects the Creature negatively in Frankenstein.

He discussed how just like the Creature needed touch, people in real life also need touch to feel good. He cited a study in which monkeys were tested with their real mother versus a terrycloth fake monkey mother. The monkeys who were given the fake monkey mother were content with it and enjoyed the comfort and touch from the cloth.