From Monday March 18th to Friday March 22nd, 2019, Siena celebrated its sixth annual Hip-Hop Week, a week-long celebration of the social and cultural impacts of the music genre. The week is coordinated by the Damietta Cross-Cultural Center and Dr. Todd Snyder, associate professor of English, as well as the professor of a popular, upper-level writing class, “Rhetoric(s) of Hip-Hop.”

Hip-Hop Week kicked off on Monday with a visit from hip-hop pioneer, Biz Markie. Born Marcel Theo Hall but better known by his stage name, Markie has been working in the music industry for over thirty years and is well-known for his unique musical style, beatboxing skills, and DJ performances, as well as a brief dabbling in an acting career. When he took the stage in the Sarazen Student Union on Monday, he performed his hit single from 1989, “Just a Friend” and the audience sang loudly along to the familiar song.

In Dr. Snyder’s introduction, he proudly shared that Siena is “the only college in the United States of America that has an annual Hip-Hop Week.” The event has become a staple not only in the Siena community but in the larger Capital Region, as Markie’s visit drew an impressive crowd of students, faculty, and community members. Dr. Snyder then lead a Q&A with Markie, asking about his initial interests in the hip-hop genre, as well as some of his personal influences with music. Markie was an engaging speaker, and his entertainer personality shown through in his responses; he would beatbox throughout his answers and crack jokes with the audience.

The events of the week also featured Hip-Hop Karaoke on Wednesday night, where students could win prizes by performing and dressing as their favorite artists, as well as a Hip-Hop Trivia Night on Thursday. This Friday March 22nd, Hip-Hop Week will conclude with “Expozé: Evolution of Hip-Hop” at 7:30pm, presented by Siena College’s Black & Latino Student Union. The event is a talent showcase that will feature a number of performances by Siena’s dance clubs. Tickets cost $3 for Siena students & faculty and $5 for outside guests, and all proceeds will be donated to the Coalition for Homeless Youth.

If you’re interested in reading more about Markie’s visit, I covered his performance and keynote lecture in the 3/29 issue of The Promethean, which can be read here.

Each year, the English Department hosts the Greyfriar Living Literature Series in which they invite a distinguished literary writer to hold a workshop, discuss writing, and read from their work. This year’s Greyfriar author was Anand Prahlad, a published poet, memoirist, and professor. Prahlad visited my African American Literature class on Tuesday March 5th in the afternoon before his lecture and shared some of his insights on writing with our class.

As part of our assignment for the day, my professor, Dr. Wilhite, assigned selected passages from Prahlad’s 2017 memoir, The Secret Life of a Black Aspie. His memoir discusses his experience with autism spectrum disorder and describes the way he sees the world. Prahlad kicks off his memoir with a bold statement: “Before I start telling you about my life, though, I should share with you a secret: I don’t remember most of it.” He admitted to our class that it was a line he wasn’t sure if he should keep in the memoir, but decide that there is an important, distinguished relationship between memory and life writing. “Everyone remembers differently,” Prahlad said.

Dr. Wilhite started off the class by having us read one of Prahlad’s poems, “Grind,” from his collection of poetry, As Good As Mango. The poem, written with extensive enjambment and impressionism, narrates an observer watching young black boys skateboarding in Harlem. Students discussed some of their observations from the poem, including Prahlad’s use of bright and positive imagery with darkness. Prahlad listened to student’s comments, then explained his own intentions with the poem, specifically how it was meant to capture a sense of percussive choreography. It was a great opportunity to hear an author speak about his own work. 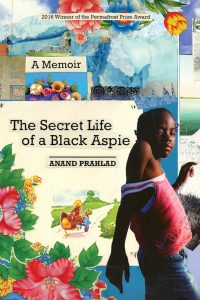 The class then transitioned into talking about the selected passages from Prahlad’s memoir. Students were able to ask Prahlad questions, and many of their inquiries centered around his writing style as someone diagnosed with autism spectrum disorder. “My relationship to memory is kind of rooted in sensory experiences,” he explained. Prahlad shared an anecdote about a time he was asked to describe the autistic experience in order to best understand how to work with someone with autism. “Imagine everything is alive,” he said. “Everything is an aura. Everything is vibrating.”

Hearing Prahlad speak about his memoir and poetry was a valuable opportunity as an aspiring writer and an English major. I was unfortunately unable to attend his reading and Q&A due to a class conflict, but I was fortunate to have the chance to hear him discuss his own work. If you’re interested in learning more about Prahlad and his publications, you can check out his website at https://prahladauthor.com.

The Career, Internship, and Graduate School Fair is one of the biggest annual events of the spring semester, expecting over 125 employers to be in attendance. Regardless of your class year, it’s a valuable event to attend because it gives you an opportunity to spruce up your resume, dress professionally, and engage with prospective career interests.

The weeks leading up to the fair provide a lot of useful resources and information regarding how to best prepare yourself for the fair. Each year, Dress for Success Albany hosts an annual clothing sale open to students, faculty, and staff. The sale offers gently used business, professional clothing at a discounted price. It’s a great opportunity to buy discounted business pants, blazers, shirts, shoes, and purses. I have attended the Dress for Success sale since my freshman year at Siena and every year, I am able to find high quality business wear for less than retail price. The sale will be happening March 8th from 12-2pm (open to students, faculty, and staff only) and on March 9th 10am-2pm (open to the public) in Foy Hall. I would definitely recommend stopping by the sale to find some business clothing to wear to the Career Fair! 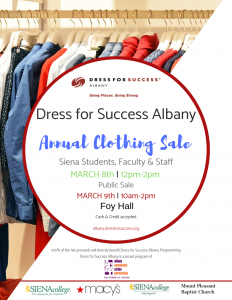 The Carer Center is also sponsoring a Resume Critique Hour on Monday, March 11th from 12-2pm in Foy Hall Lobby. Students will be able to receive feedback on their resumes and connect with employers prior to the fair. Another great and entertaining event is the Dress for Success Fashion show, taking place on Wednesday, March 13th at 9pm in the SSU. The fashion show highlights what to wear and, more specifically, what not to wear in the professional world. If you’ve never been to the Career Fair and are nervous about what to expect, consider attending the “Make Yourself Stand Out at the Career Fair Employer Presentation” on Monday, March 18th from 12:30-1:30pm in the library, room L-26. This event will provide some helpful tips on professionalism and networking, as well as help alleviate any nerves about attending the fair.

The 2019 Career Fair is a great opportunity to network with employers, polish your resume, and practice professionalism. The best piece of advice I can give is to go into the fair with an open mind – don’t limit yourself to speak to employers only in your field. It can be nerve-wracking to approach people you’ve never spoken to before, especially in a professional setting, but part of entering the job market is getting comfortable with being uncomfortable. No matter what class year or major you are, all students can find some sort of value in the event.

RSVP for the Carer Fair online at saintsconnect.edu! The 2019 Spring Career, Internship, and Graduate School Fair will be taking place on Tuesday March 19th from 3-6pm in the MAC.