This past Wednesday Jan. 30, 2019, author and activist Tim Wise delivered a lecture at Siena as the speaker of the 32nd Martin Luther King Jr. and Coretta Scott King Lecture Series on Race and Nonviolent Social Change. This year’s lecture was held in the MAC to accommodate the large audience. I’m terrible with numbers, but there were easily over 200 students, faculty, and people from the local community at the event.

Wise had a very commanding presence as a speaker, constantly keeping the attention on him and using his humor to connect with the audience. He commented at the beginning of his presentation that he has been delivering speeches nationwide for almost thirty years, and his impressive rhetorical abilities shone through.

The MLK keynote centered on the idea of a dangerous historical memory. Wise tied this notion to the 2016 election, immigration conflicts, and police brutality, honing in on the idea that past history is constantly repeating itself due to America’s faulty historical memory. “We keep trying to reinvent the wheel instead of understanding that we’re fighting the same dragons,” Wise explained, “the same monsters we’ve always been fighting.” He concluded his lecture optimistically and answered an hour of audience questions.

I will be covering Wise’s visit in the 2/15 issue of The Promethean, so if you’re interested in more extensive coverage of his time on campus and lecture, be sure to check it out.

This Wednesday, anti-racism activist and published author Tim Wise will take the stage in the MAC and deliver his talk, “Challenging the Culture of Cruelty: Understanding and Defeating Race and Class Inequity in America.” Wise will be the keynote speaker 32nd Martin Luther King Jr. and Coretta Scott King Lecture Series on Race and Nonviolent Social Change. I strongly encourage everyone to attend Tim Wise’s lecture this Wednesday at 7pm in the MAC, and because these MLK keynotes usually draw in a large crowd of faculty, students, and members of the local community, I suggest getting there early to reserve a seat. 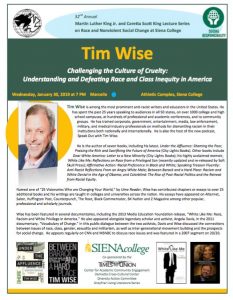 As the event approaches, I am reminded of last year’s speaker, Luis Alberto Urrea, whose meditation on borders seems especially relevant in regards to the political climate today. I personally covered Urrea’s visit in The Promethean, which involved a lot of research, interviewing, editing…and re-editing. Out of all the articles I have written for the paper and events I have attended at Siena, Urrea’s keynote keeps coming back to me, maybe because his encouragement of unity is more important now than ever in the face of political division.

A self-proclaimed “border writer,” Urrea’s talk centered on issues surrounding the US-Mexico border, which is arguably a more politically charged topic now than when he delivered his keynote speech last year. He narrated his own experience as a Mexican-American, highlighting his struggles with racism, discrimination, and oppression, and acknowledged that many anti-immigrant sentiments are born out of ignorance. “People don’t understand the folks who seek solace and shelter here in this country,” Urrea said.

Despite the emotional, poignant nature of his talk, the author ended his keynote with a sense of optimism, encouraging the use of art and human connection in the face of division. “There’s got to be a better way,” Urrea addressed the audience. “Force doesn’t work, politics doesn’t work, co-optive religion’s not working. What’s going to work? Maybe only, right now, art and song and hope and each other. Maybe we can understand there’s no ‘them’ out there. There’s only ‘us’ out there. Maybe we can help each other.”