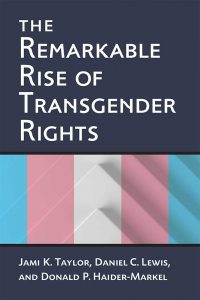 Dr. Daniel Lewis held a book release lunch this past Wednesday, Oct. 24, to promote his most recent publication, The Remarkable Rise of Transgender Rights. The event was held in the Norm and drew in students of all majors and interests. When asked how he decided on pursuing the topic of transgender rights, Dr. Lewis said, “I’ve been broadly interested in the idea of how minority rights are represented in our democratic system. Through networking with my co-authors, I started doing some work there and realized there wasn’t really a comprehensive examination of transgender rights politics. We saw it as more of a need and something we were passionate about trying to understand.”

Dr. Lewis’ book seeks to explain how the transgender rights movement has taken shape over the years and how they can achieve political success. He shared some of the successes and obstacles transgender people have faced. He used a Powerpoint with images, graphs, and statistics that I thought helped the audience more fully understand his research.

Part of their research involved running national surveys asking about people’s attitudes towards transgender people and transgender rights policies. On a “hot to cold” spectrum, transgender people rank lower than gays & lesbians, gun owners, interracial couples, police, scientists, and veterans, which suggests there is a generally negative response to transgender people. Similarly, though the overwhelming majority of survey takers believed in discrimination protection for transgender people, the public opinion on bathroom access is still widely divided – there is an even split between those who believe people should use the bathroom reflecting their current gender identity versus birth gender.