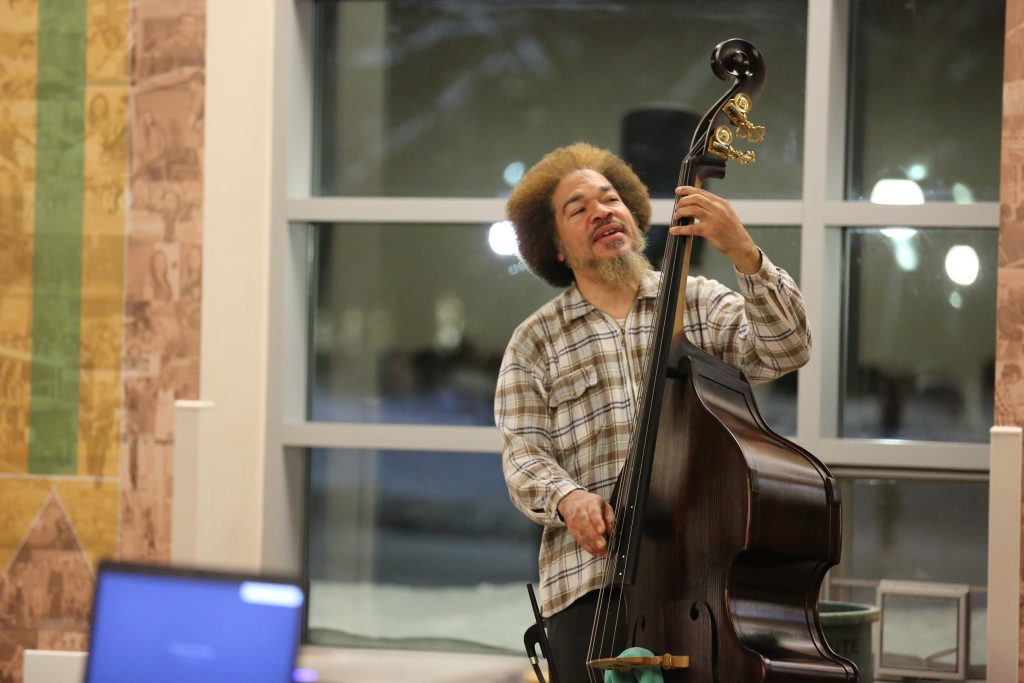 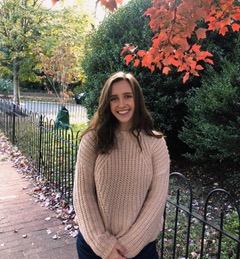 McKenna Donegan, a junior Political Science major and Pre-Law certificate student, recently had an article she wrote featured in Ms. Magazine. Her piece “Ranked Choice Voting Would Help Women Candidates in New York City- and Across the Country” delves into the research-based impacts that a ranked-choice vote election could have for candidates. Through her current participation in American University’s Washington Semester Program as an intern for RepresentWomen, McKenna has been researching the structural reform.

RepresentWomen is a nonpartisan, nonprofit research hub that works to increase women’s representation in elected office and advocates for systemic reforms to the recruitment process, voting systems, and legislative practices. Since September, McKenna has been in Washington D.C interning and familiarizing herself with past research that the advocacy group has produced. “On Monday, November 4th, I was asked by my supervisor Courtney Lamendola and RepresentWomen Executive Director Cynthia Richie Terrell to write a short article about ranked-choice voting and how it helps women candidates, because the next day, New York City was voting on whether or not to adopt the measure” McKenna explained.

With only a day before NYC voters would start arriving at the polls, McKenna quickly got to work. After leaving her internship that day, McKenna received an email from her supervisor stating that she thought the article was great and that she wanted to send it in to Ms. Magazine for publication. On November 5th, the same day that 73% of NYC voters said “Yes” to bringing ranked-choice voting to various elections, McKenna’s article was published.

McKenna shared that what helped her most in composing her piece was a study done by RepresentWomen in 2016 that focused on women and people of color running for office in the California Bay Area after implementing ranked-choice voting. “This study was very helpful when I was writing the article because it showed that after the implementation of RCV, the California Bay Area saw an increase in the number of women and people of color running and winning local elective office.” In her article, McKenna further explains this shift, writing that “…the percentage of candidates of color for local elective office increased by 5 percentage points after the implementation of ranked-choice voting. To put this into perspective, neighboring cities that had not implemented RCV only saw a 0.3 percent increase in the number of candidates of color who ran for local elected office.”

In reference to the publication of her piece and her research internship, McKenna expressed that “It was a great experience and one that I would have never had if it weren’t for the (American University’s) Washington Semester Program.” McKenna’s full article in Ms. Magazine can be found here. Congratulations on this awesome accomplishment, McKenna! 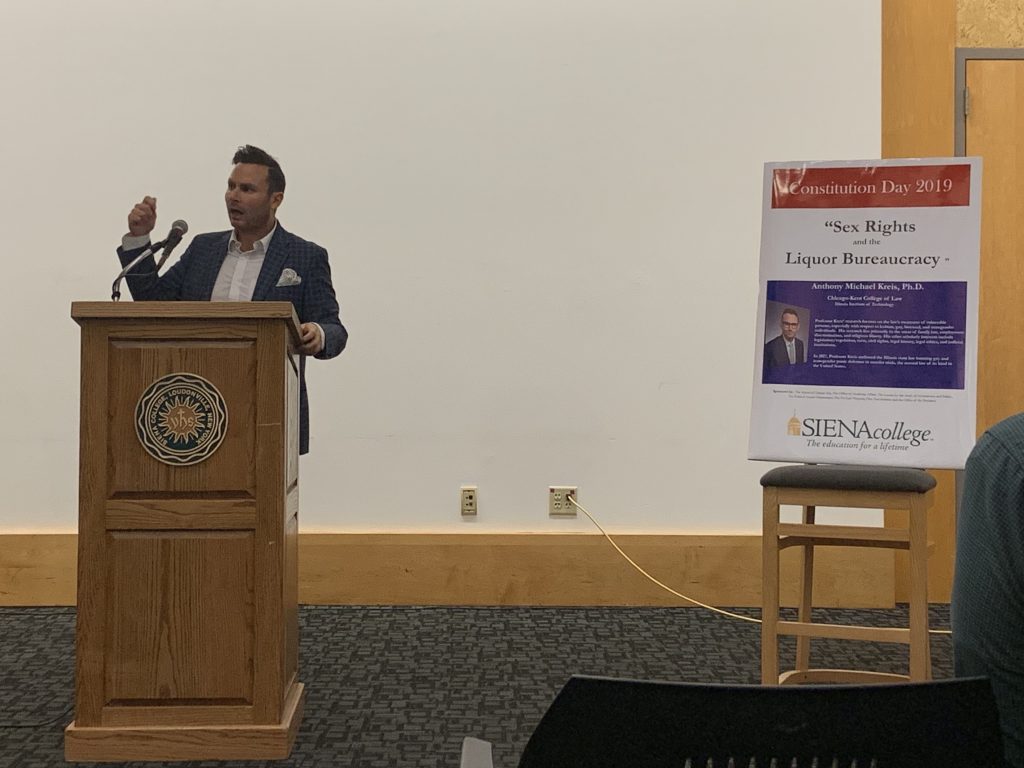 On Monday, September 23rd, the Siena community came out to attend “Constitution Day 2019: Sex Rights and the Liquor of Bureaucracy” featuring guest lecturer, Dr. Anthony Michael Kreis. A national holiday, Constitution Day exists to commemorate the signing of the Constitution in September, 1787. Here on campus, Constitution Day serves as an annual opportunity to discuss a relevant concern regarding constitutional law. This year’s Constitution Day took on a question that has been recently creating turmoil in American legislation: who really is protected under Title VII of the Civil Rights Act of 1964?

The discussion was opened by Professor of Political Science, Dr. Leonard Cutler. Dr. Cutler elaborated on the relevance of this year’s theme, “A few weeks ago, the Trump administration took it’s staunchest position to date in legalizing anti-gay discrimination..” he continued  “..when it asked the supreme court of the United States to declare that Title VII of the Civil Rights Act permits private companies to fire workers based on their sexual orientation.”

Title VII of the Civil Rights Act outlaws discrimination based on race, color, religion, sex, or national origin. As explained by Dr. Cutler, the current presidential administration has taken on the stance that members of the LGBTQ community are not protected under Title VII in regards to private employers discriminatory practices. Following Dr. Cutler was Professor of Political Science, Dr. Jack Collens. Dr. Kreis and Dr. Collens attended graduate school together at the University of Georgia and after sharing his accolades with the crowd, it was time for Dr. Collens to invite Dr. Kreis to the stage.

Dr. Anthony Michael Kreis currently teaches legal writing at Chicago-Kent College of Law. He authored the Illinois state law banning gay and transgender panic defenses in murder trials in 2017, which is the second of its kind in the U.S. Dr. Kreis opened by discussing how the accidental discovery of gay and lesbian bars during the Prohibition era sparked an ongoing dispute of the LGBTQ, immigrant, and working class communities versus American law-makers and private groups that wanted to maintain the social norms of pre-Industrial Revolution times.

“If you had too many feminine men in your bar, they deemed it a place of disorderly conduct. And they put pressure on wholesalers to deny those establishments of liquor” Kreis stated. “In the 1940’s, 50’s, and 60’s the state said ‘If we see too many feminine men in a bar, we’re assuming it’s a gay bar and we’re shutting it down” he said about the determination if establishments could remain open post-prohibition. Basically, the battle between the LGBTQ community and American law-makers has been occurring for over a century.

At this point in the lecture, the question still remained, what does all of this mean for today’s concerns surrounding a new interpretation of Title VII? “The idea here is that you cannot discriminate against someone because of their sexual orientation without also discriminating against them because of their sex.” He elaborated that the stereotypes surrounding gender roles used by employers to justify discriminatory practices against LGTBQ employees directly plays into sex discrimination.

Dr. Kreis closed out his discussion by stating “Title VII is ultimately supposed to reflect our constitutional values and the law has been shaped by an understanding that sex stereotypes are dangerous..” Following the lecture, Dr. Kreis opened the floor for Q&A and soon after, Constitution Day 2019 came to an end. After all was said and done, attendees walked away from the event with a greater understanding on a topic that Dr. Kreis referred to as, currently, “the greatest civil rights case of our time.”

Dr. Daniel Lewis held a book release lunch this past Wednesday, Oct. 24, to promote his most recent publication, The Remarkable Rise of Transgender Rights. The event was held in the Norm and drew in students of all majors and interests. When asked how he decided on pursuing the topic of transgender rights, Dr. Lewis said, “I’ve been broadly interested in the idea of how minority rights are represented in our democratic system. Through networking with my co-authors, I started doing some work there and realized there wasn’t really a comprehensive examination of transgender rights politics. We saw it as more of a need and something we were passionate about trying to understand.”

Dr. Lewis’ book seeks to explain how the transgender rights movement has taken shape over the years and how they can achieve political success. He shared some of the successes and obstacles transgender people have faced. He used a Powerpoint with images, graphs, and statistics that I thought helped the audience more fully understand his research.

Part of their research involved running national surveys asking about people’s attitudes towards transgender people and transgender rights policies. On a “hot to cold” spectrum, transgender people rank lower than gays & lesbians, gun owners, interracial couples, police, scientists, and veterans, which suggests there is a generally negative response to transgender people. Similarly, though the overwhelming majority of survey takers believed in discrimination protection for transgender people, the public opinion on bathroom access is still widely divided – there is an even split between those who believe people should use the bathroom reflecting their current gender identity versus birth gender.