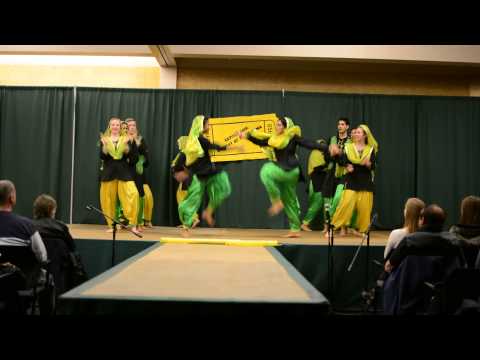 This past Friday, Siena hosted its annual Fall Fusion event and I not only was able to attend, but I also had the honor of participating in the event! Fall Fusion 2016: “I Have a Dream” consisted of performances by the Irish Dance team, SOLID, the Hip Hop team, the Bhangra team, and several other individual students and groups on campus and all proceeds were donated to the Homeless Action Committee.  There was a HUGE turnout for Fall Fusion this year, which truly was amazing to see! The line to get into the event was practically out the door and group after group lined the back of the SSU after all of the chairs had been taken.  Fall Fusion is one of my favorite events during the year because it’s a time where everyone on campus has the chance to come together and support the talents and hard work of their fellow classmates.  However, during this year’s Fall Fusion, I especially felt a sense of community among everyone who attended.  Despite everything going on in the world now and the uncertainty that even lingers on our own campus, students were able to come together as one cohesive group.  During each and every performance, the group on stage received resounding cheers and applause and there was not one negative comment passed around after the show ended.

I have been a member of the Siena College Irish Dance team since freshman year and I have to admit, participating in my last Fall Fusion was a little weird.  Irish dance has been a part of my life since I was six years old and I truly have a passion for every single aspect of the art.  My team and I put an immense amount of work into our Fall Fusion performance, which included having to sacrifice Sunday afternoons and some nights during the week to work on formation and choreography, but I wouldn’t have wanted to dance with any other group of people.  Teams like Irish Dance and events like Fall Fusion truly bring people of all types of backgrounds, cultures, and interests together.  Diversity is something that Siena College and the School of Liberal Arts heavily emphasizes and through my time with the Irish Dance team, I have been able to meet and become friendly with so many other students here on campus who share my same interest in dance and performing.  Despite the hard work and the enormous amount of time that was put into this performance, I would not trade these experiences for anything in the world.

Were you able to attend Fall Fusion? Let me know in the comments!