What’s the first thing that comes to mind when you think of sculptures? Probably not tuna sandwiches. But for sculptor Madison LaVallee, sandwiches help her deal with a way of thinking about sculpture. Tuna sandwiches represent the time she spent growing up with her grandmother and bring back the sense of nostalgia over sharing a meal together. The sandwiches also reflect her grandparents’ gender roles, which she described as the “traditional gender roles of the 1950s family unit” – her grandma was a stay-at-home mom and her grandpa worked for General Electric. 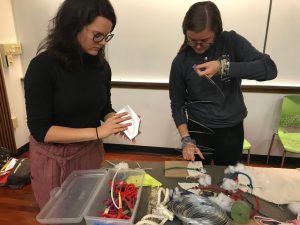 LaVallee and a student work with materials

LaVallee makes “material sandwiches” when sculpting. Her works focus on materials used in the home, which she stacks together in resemblance of a sandwich. She sculpts with what she considers “material outcasts” – drywall, carpet underlay, and popcorn ceiling paint – to make her unique sculptures. LaVallee initially thought sculptures had to be sophisticated and created through negative space, a notion which she rejects in her own work. She showed the audience images of her finished works, one of which included bricks from her childhood home. The materials themselves are symbolic, not only of home, but of the memories they elicit in the viewer. LaVallee explained that her works were not site-specific but site-related. “I’m thinking about that place and responding to it,” she said. 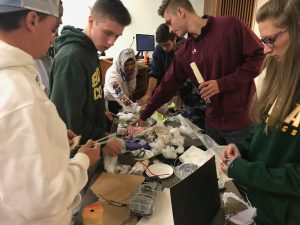 Her background was originally in drawing and painting, but LaVallee was drawn to sculpting. “I was unsure how to navigate what it meant to be a sculptor,” LaVallee said. “I kind of wanted to experiment.” During her residency, LaVallee began making industrial sculptures in the woods, which caused her to realize how disconnected she had been from nature. She started introducing fake trees and green elements, placing them with construction materials, in her sculptures. “I’m identifying with nature in this faux, false way,” she explained. 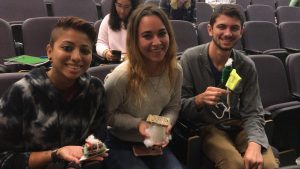 Students pose with their finished sculptures

LaVallee conducted a hands-on activity for students at the end of her talk. She brought crates full of materials, including chicken wire, yarn, cardboard, and pipe cleaners. Though there were no rules on what types of sculptures to make, LaVallee encouraged students to pick one “hard” and “soft” material while crafting. They were able to piece their work together with a hot glue gun and take them home to keep as a reminder of LaVallee’s work and inspiration.

Students can check out LaVallee’s work on Instagram at @madisonlavallee_art.