The 26th installment of the Clare Center Lecture Series brought Dr. Amy Koehlinger to campus on the evening of Wednesday, October 2nd. Each year, the lecture series aims to engage the Siena community in learning about a contemporary or historical aspect of the Franciscan tradition. This year’s lecture highlighted the Franciscan value of relational love in the developing of and revolutionary medical practices in the Mayo Clinic.

“I’m coming from Oregon so it may seem raining to you guys, but for me this is just an average Wednesday” Dr. Koehlinger joked about the dreary night as she began her presentation.  Dr. Koehlinger, an assistant professor of history and religious studies at Oregon State University, focuses her research on the culture of American Catholicism, the intersections of social reform and religion, and gender roles within American religious traditions. For her visit to Siena, it was only fitting that she discussed the historical connections between the  Franciscans and the Mayo clinic since the college announced it’s new dual-nursing program with Maria College last month.

As Dr. Koehlinger explained in her lecture, the Mayo Clinic is a premier medical center located in Rochester, Minnesota. While today it is currently ranked as the number 1 overall best hospital in the United States by the U.S News and World Report and is home to one of the top medical schools in the nation, the clinic had very humble beginnings. After a tornado struck the small town of Rochester, many individuals were left in need of immediate medical care. As they both realized their community was in desperate need of aid, a partnership between a physician William Mayo and Catholic nun Mother Mary Moes was born.

Dr. Mayo and Mother Mary Moes  would go on to lay the foundation for  “one of the most unexpected and enduring institutional partnerships in the American medical profession” as Dr. Koehlinger referred to it. The duo recruited local physicians and the sisters from Mother Moes convent and got to work healing their community members. Years later, Mother Moes and Dr. Mayo would go on to open up St. Mary’s Hospital, a Catholic facility fully staffed with Catholic sisters, but open to people from all religious backgrounds.

“(The Franciscan  sisters) worked back-to -back shifts and slept on the floor when the hospital was filled to capacity, as it almost always was” Dr. Koehlinger stated. In her discussion, she explained that the sacrifices the sisters made were what made the hospital so revolutionary at the time. Patients were never turned away, measures to insure conditions were sanitary were being implemented like never before, and most importantly, the staff treated the entire being of a patient, not just the part of their body that most obviously needed care. Throughout the years, the Mayo Clinic never lost its core Franciscan values, as Dr. Koehlinger expressed in her closing. While eventually the nursing staff would no longer only be made up of  Franciscan sisters and the  Franciscans would let go of legal and financial control of the hospital all together, the core values that started it all still live on in the organization to this day.

Siena hosted the 25th annual Clare Center lecture on Tuesday Oct. 2nd, welcoming Dr. Joy Schroeder, a religion professor and Lutheran pastor, to give her lecture on “Compassion and Imagination and Franciscan Biblical Interpretation.” Dr. Schroeder’s concentrations are in the history of biblical interpretation and women in the church. Dr. Holly Grieco introduced Dr. Schroeder and explained the origins of the Clare Center lecture. “It began as a way to welcome the religious studies department into its new home on campus,” Dr. Grieco said.

Dr. Schroeder emphasized the importance of slow, reflective reading during her lecture. She shared the statistic that the human attention span has diminished to eight seconds, which is one second less than a goldfish’s. Tying a majority of her speech and biblical interpretations into the Syrian and Central American refugee crises, Dr. Schroeder focused on the importance of using our imagination and compassion for the betterment of the world.

In reference to Siena’s Franciscan core curriculum, she mentioned the room to integrate compassionate imagination. “It can be done with holiness and imagination,” she said, “the kind that brings about good business ethics and good business practices.”

Dr. Schroeder’s lecture was part of the celebration of Francis Week, a week-long celebration of St. Francis’ life and values. Other events through this week include the Adoration of the Blessed Sacrament, the Feast of St. Francis, and Community Service Day. All students are encouraged to take part in this celebration. 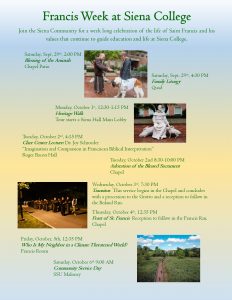 The lecture was a great addition to Francis Week because it highlighted the importance of the Franciscan traditions in both the Siena community and the world at large. “With both compassion and imagination, we can imagine new ways to do just a little bit of repair work to help heal this broken world,” Dr. Schroeder concluded.