Do you ever wonder what your professors do when they’re not assigning homework or grading essays? In an English Department Colloquium on Tuesday Oct. 30, students and faculty learned about Dr. Keith Wilhite’s and Dr. Christiane Farnan’s research projects while they were both away on a spring semester-long sabbatical last year. 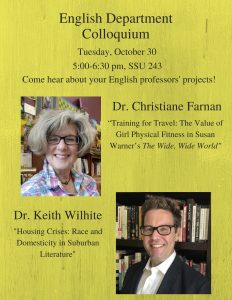 Dr. Wilhite, associate professor of English, titled his talk, “Contested Terrain: The Suburbs, U.S. Literature, and the Ends of Regionalism.” Dr. Wilhite’s primary focus is in urban and suburban studies. His book analyzes the 1945 escalation of suburban sprawl through the 2008 housing crises. He explained that his book “scrutinize[s] the cultural idea of the suburban home.” Dr. Wilhite drew in multiple sources to explain this shift, including the House & Garden magazine and A Raisin in the Sun (1959) by Lorraine Hansberry. The two chapters he worked on during his sabbatical discuss the American desire to progress forward following World War I and the effect of increased suburban housing on race. In the conclusion of his presentation, Dr. Wilhite read a passage from the chapters he worked on during his sabbatical.

Dr. Christiane Farnan is an associate professor of English who focuses primarily on mid-nineteenth to early twentieth century women writers. During her sabbatical last spring, she wrote about The Wide, Wide World by Susan Warner in which Ellen Montgomery travels from New York City to the Adirondacks to Edinburgh, Scotland through the duration of the novel. Dr. Farnan’s talk, titled “Training for Travel: The Value of Girl Physical Fitness in Susan Warner’s The Wide, Wide World,” argues about the depiction of protagonist Ellen Montgomery in the novel. She explained that in her essay she argues that “Susan Warner presents the mid-nineteenth century American girl abroad as a different, unusually athletic, more interesting kind of mid-nineteenth century girl.” Dr. Farnan supported her claims with evidence from the book, including Ellen’s physical fitness, spiritual guidance, and psychological strength.

At the end of the colloquium, both professors responded to student and faculty questions. I have had Dr. Wilhite as a professor for a few classes now and have never had the pleasure of taking one of Dr. Farnan’s classes, but it was fascinating to hear about each professor’s individual research. I oftentimes think of my professors only in the classroom and don’t think about all the additional work and research they do in their academic careers, so it was interesting to learn about what they’ve been working on during their sabbaticals.

For more extensive coverage of the English Department Colloquium, keep an eye out for my article in the 11/16 issue of the Promethean! To stay updated on upcoming events on campus, like and follow our social media pages on Facebook, Instagram, and Twitter!

How do we deal with our distrustful feelings? Dr. Jason D’Cruz, philosophy professor at UAlbany, has been working through this question in his research project, “Distrusting Distrust.” He broke down his plan for the lecture, wanting to first work through an analysis of distrustful behavior, then explain the risks of distrust, and finally deliver a proposal on how to respond to these risks.

“I think we should be distrustful of a lot of our distrustful feelings,” Dr. D’Cruz said. He gave an example of a study in which participants were shown several faces and were asked to choose which ones looked the most trustworthy; faces with a turned-down mouth and furrowed brow were regarded as untrustworthy. Dr. D’Cruz explained there is no correlation between one’s face and integrity, and that we respond to new faces based on our past experiences, which are also shaped by difference, prejudice, and stereotypes.

Dr. D’Cruz continued discussing the moral risks of distrust, which include insult & disrespect, and the notion of self-fulfillment. He also commented on the epistemic risks, which are interpretive biasing and asymmetrical feedback. When we distrust based on bias or preconceived notions, we never learn how the person would have responded if we had trusted them.

As a solution, Dr. D’Cruz proposed humble trust, which he defined as a “social virtue and skill that responds to the moral and epistemic pathologies of distrust.” The aims of humble trust are to cultivate full trust of those who are trustworthy. The humble trust mindset similarly seeks to reframe and reorient our thinking, pushing us to make the decision to actively trust in the face of fear. Ultimately, the humble trust mindset seeks to create conditions where a person can rationally trust that they will be trusted.

After finishing his lecture, Dr. D’Cruz answered questions from students and faculty to help the audience fully understand his research and proposals. “Distrusting Distrust” was an interesting, thought-provoking colloquium. To learn about upcoming events on campus, like and follow our Facebook, Twitter, and Instagram!