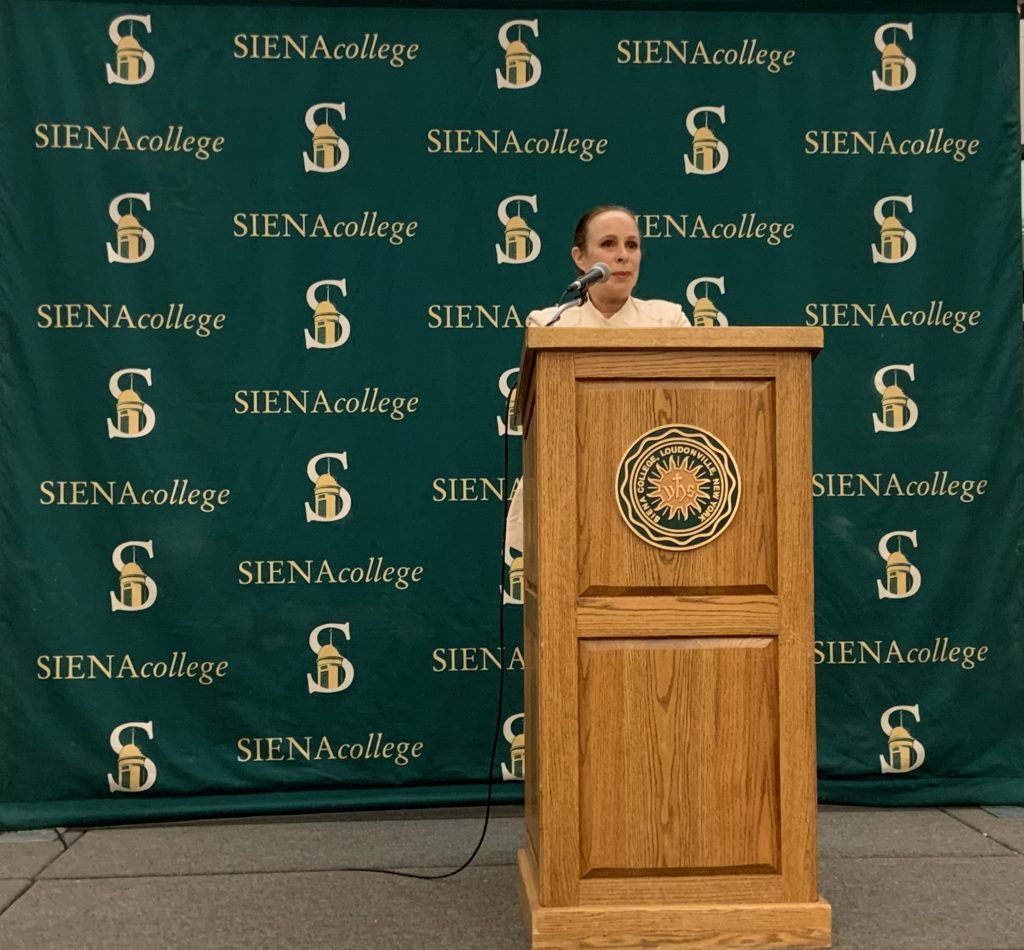 Alina Fernandez is one of the most well known Cuban anti-communist activists and a major critic of the Cuban government. She is also the daughter of the Cuban communist revolution leader and former ruler of the state, Fidel Castro. She is the niece of the current leader of Cuba, Raúl Castro, who took over political control of the nation after his brother’s death in April 2011. Since fleeing Cuba in 1993, Alina has been residing in the United States. On the evening of Monday, October 7th, she visited Siena to discuss her journey.

Sponsored by the Damietta Cross-Cultural Center, the Latinx Student Association, the multi-cultural studies minor, and the Diversity Action Committee, Alina was invited to campus as the Latinx Heritage Month Keynote Lecturer. President of the Latinx Student Association, Laura Rodriguez, had the honor of welcoming her to the stage. After taking the mic, Alina began telling the crowd the story of her life, growing up in the Cuban revolution.

Alina spoke of her mother, Natalia Revuelta Clew,’s relationship with Castro as well as her marriage with her father, Dr. Orlando Fernandez. Well, step-father, as she would later explain. Natalia and Dr. Fernandez initially had a strong marriage and had a daughter together, Alina’s older sister. Alina’s mother became involved with the communist movement and held key roles in the initial rebel attacks in 1953. As leader of the rebels, Castro was incarcerated as a result of these attacks. He and Natalia wrote letters to one another for the entirety of his imprisonment. “How powerful a letter can be” Alina expressed as she believes that it was these letters that made her parents fall in love.

She went on to explain that after being released from prison, Castro and Natalia would secretly meet with one another, as she was still married to Dr. Fernandez. Eventually, these meet-ups would lead to the conception of Alina. It would not be until Alina was ten years old that her mother would confess to her that Castro, and not Dr. Fernandez, was her real father. As Alina’s life was just beginning, as was the complete overthrow of the Cuban government. After Castro took control, the nation was torn.

“One morning, my sister wasn’t in her bed. And I was told they were traitors, worms. That’s what they called the Cubans that left the island.” As the revolution quickly progressed, Alina recalled how Dr. Fernandez and her sister fled Cuba after his private clinic was taken over by the rebels. She went on to explain that after Castro took control, private businesses, properties, hotels, and anything else considered to be capitalistic was invaded and destroyed. “Even Christmas was a capitalistic celebration, and like everything else, vanished.” Cuba fell apart as Alina grew up. She watched her favorite cartoons disappear and stared in confusion as Castro, the man who was always on her T.V screen, also regularly appeared in her mother’s home late at night.

It wouldn’t be until Alina was well passed childhood that she could make her escape from Cuba. With the help of some friends in America and disguised as a Spanish traveler, Alina was able to flee from her homeland in December of 1993. She noted that just five years ago, she returned to Cuba for the first time since her escape and saw that there were small, yet positive, changes occurring. Just eight years ago, Cubans were not allowed to buy and sell homes and cars and could not use cell phones. Alina concluded by telling the crowd that today, the Cuban government now allows for all of this to take place and that she was pleased to see such progress.