When Saul Flores was a junior in college, he walked 5,328 miles from Quito, Ecuador to the United States. He traveled through 10 countries and took over 20,000 photos in an effort to capture the danger of an immigrant’s journey north. His project, “The Walk of Immigrants,” made national news, and Flores has been featured on NPR, TEDx, The New York Times, and The Huffington Post. Flores was invited as the Keynote Speaker for Hunger & Homelessness Awareness Week and spoke in the Sarazen Student Union on Wednesday Nov. 14, 2018. 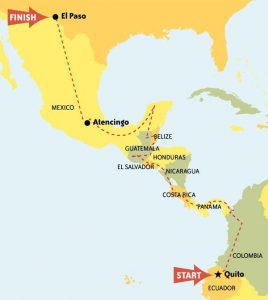 During his lecture, “Fleeing Home: Immigration and the Cost of Poverty,” Flores shared personal anecdotes from his experience as a first generation Mexican-American. He explained how both his parents were immigrants: “My mom left because she was escaping poverty and my father left because he was escaping a civil war.” Flores talked about his parents’ experiences working and struggling to provide for their family in New York City. “Being an immigrant in America is very hard,” he said. “It’s been a very turbulent time for a lot of people across the country, and I keep going back to my childhood.” Flores then shared a particularly moving story in which he and his sister witnessed his mother, who worked as a housekeeper on the Upper West Side, scrubbing floors for a living for the first time. “We had never seen my mom scrub the floors before,” Flores said. “My guardian angel, my protector, was on her knees scrubbing floors.”

Photo courtesy of the Franciscan Center for Service & Advocacy

Flores was inspired to take his 5,328-mile trek by a service trip to his mother’s hometown in Mexico. While visiting his grandmother in Mexico, he went to the tiny cinderblock schoolhouse that had been constructed in the 1970s to provide an education to the children of the community. When Flores and his friends went inside the schoolhouse, 124 children began singing the Mexican national anthem to them. “It was so beautiful because they were introducing us into their home,” Flores said. He started noticing the poor conditions of the building, like the crumbling walls, flickering light bulbs, and splintering desks. Flores’ grandmother explained to him that this would have been the school he would have gone to if his mother had not immigrated to the United States. This trip was the catalyst for Flores’ journey, especially once he was told the schoolhouse was doomed to close. In his travels, he took over 20,000 photos, which he sold and donated the proceeds to the schoolhouse’s repairs. Flores shared stories of his 3 month-long journey, with one particularly harrowing experience in the Darién Gap, a passage of swampland between Panama and Colombia. Flores spoke on the positive impact of his journey, explaining that it sparked a national conversation on immigration.

Throughout his lecture and into the Q&A, Flores emphasized the importance of international travel, the influence of passion, and the power of grit and perseverance. Keep an eye out for more extensive coverage of this event in my article in the 11/30 issue of The Promethean! If you’re interested in learning more about Saul’s experience, check out his social media pages at @sweetlikesaul.