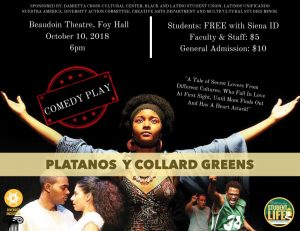 This past Wednesday, I had the pleasure of attending Platanos y Collard Greens, an off-Broadway comedy and romance play. Even though I’m a senior, it was the first play that I’ve gone to at Siena in the Beaudoin Theatre. I went in knowing very little about the play itself, only that it was a comedy with the tagline, “A tale of secret lovers from different cultures, who fall in love at first sight, until Mom finds out and has a heart attack!”

Platanos y Collard Greens focuses on two college students, Freeman, an African-American man, and Angelita, a Dominican woman, who fall in love, despite Angelita’s mother’s wishes. Angelita’s mother, who immigrated from the Dominican Republic to New York City, is vehemently against her daughter marrying outside her race, and she is especially opposed because Freeman is African-American. Amidst the relationship issues, racial tensions, and generational differences, Freeman campaigns for student government president with his friend Malady and his cousin OK. Though the concept of Platanos y Collard Greens is in itself a heavy topic, the play is very funny. Freeman’s cousin OK had the audience roaring with laughter for the entire performance, delivering witty one-liners and making hilarious facial expressions.

One thing I really enjoyed about the play was the incorporation of slam poetry and spoken word poems. Characters would often directly address the audience and perform a slam poem about what was troubling their character at that moment in the play. Each act was separated by a poem from a different character. For example, Angelita delivered a spoken word monologue about how she is Latina, but more than just a sexual object. Even though the actors kept the audience laughing through the entire play, Platanos y Collard Greens still managed to discuss contemporary racial issues on a deeper level, captivating the audience while simultaneously providing food for thought.

Keep an eye out for further coverage of Platanos y Collard Greens in the 10/19 issue of the Promethean!