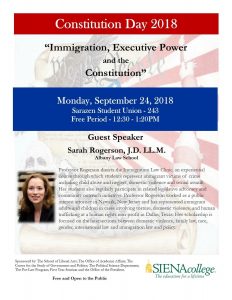 Nearly one hundred students and faculty attended Sarah Rogerson’s lecture in the SSU on Monday Sept. 24, titled “Immigration, Executive Power and the Constitution.” The lecture was in celebration of Constitution Day, which takes place annually on Sept. 17 in honor of the signing of the U.S. Constitution. The event was not only intended for students interested in political science, but those of all majors, political affiliations, and backgrounds.

After a performance of the Star Spangled Banner by the Siena Chamber Singers, Dr. Cutler, political science professor at Siena, introduced Rogerson. Rogerson is a clinical professor of law at Albany Law School, and the director of the Immigration Law Clinic and the Law Clinic & Justice Center.

“If you live and work in the United States, you are going to encounter immigration issues,” Rogerson explained. “The word ‘immigration’ is not found in the Constitution, so what gives?” She used a powerpoint to explore the Constitutional basis regarding immigration, showing students passages from the document and describing their origin.

Rogerson spoke on a number of immigration issues in our headlines today, including the broken legal system, Muslim Ban, and Deferred Action for Childhood Arrivals (DACA). She also discussed the ways in which immigration is depicted by the media. “Labels and terminology are important,” she said. “In order to be an immigrant, you have to have an intent to stay.” Rogerson emphasized the importance of knowing the difference between immigrant as a legal term and immigration/immigrating as a verb, something that is very hard to communicate through the news and news cycles.

Rogerson’s keynote lecture was valuable to all students and a great reflection of Constitution Day 2018. Check out and like our Facebook page to stay updated on upcoming SoLA events!