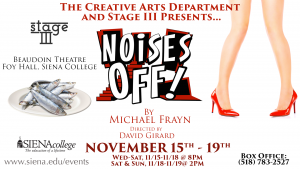 Each year, the Creative Arts department presents their fall production. This year they presented Noises Off!

If you enjoy plays within plays. You would love Noises Off! The play is broken up into three acts but within each act they are performing one act of the play within the play, Nothing On. The entire play is set in a living room of the Brent’s country home.

I’ve never seen a play within a play type of production and it was definitely interesting! I think it’s cool because the actors and actresses that are in plays know first hand what it is like to be in a production so because of this, I think it can make for a very interesting performance.

To make it believable, inside the program for Noises Off there was a program for the play within the play, Nothing On. Not only was their a playbill but they had an entire cast list with bios and everything! I thought that was very interesting and cool that they were able to make the performance even more authentic.

I also enjoyed the fact that there were many underclassmen involved in this play. Upon reading the program, I learned that a majority of the people involved with the  play are freshman and sophomores. It’s great to see new Siena students getting involved in Stage III and Creative Arts!

As always I would like to thank the Creative Arts department and Stage III for putting on these shows every year! If you didn’t attend this production be sure to attend the next one! Not only do they do a fall performance but they always do one in the spring too!

If you’re interested in a performance by Creative Arts coming up soon, be sure to attend the Siena Chamber Orchestra performance this Thursday November 30 at 7pm in Foy Hall!