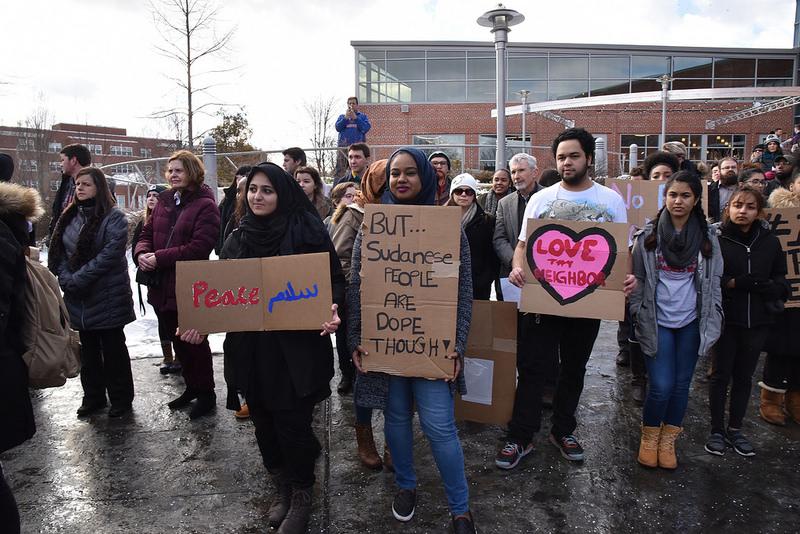 It’s been awhile since I’ve been able to write for bLAb and it feels great to be back! I had the chance to attend my first event of the semester yesterday and I have to say, it wasn’t something I have ever been to before.

The news in the US hasn’t exactly been positive or uplifting these past couple of weeks, especially with President Trump’s immediate travel ban after the inauguration.  Many people are scared, angry, and uncertain about what the future holds, but many have also come together in support and protest of their friends, family and colleagues.  Yesterday, I had the chance to attend a solidarity sit-in to support my fellow Saints who are Muslim and I am so glad that I did! Until yesterday, I had never been to a rally and didn’t quite know what it was going to be like.  I was very happy to see how big the turnout was and I saw so many people that I knew! Students, faculty, administrators, people from all over campus joined the crowd in front of the SSU to listen to powerful words about peace, freedom of religion, and loving one another.  I was especially pleased to hear some of Siena’s own friars speak!

I was so inspired by the sense of community during the event! Siena College is like a community in it of itself and in times like these, a community needs to stick together. Being able to hear the words of support from each person that spoke really made me realize what Siena College and its Franciscan values is really about.  It doesn’t matter who someone is or where they’re from or what religion they practice, they are irreplaceable and valuable parts of the Siena Saints community.  Attending this rally was very eye opening and I very much hope to see more events on campus like this in the future.

Did you attend the sit-in yesterday? Let me know in the comments!